When COVID scrambled our March Madness plans, we saw an opportunity to create a delightfully engaging, homemade social media campaign. See how we wrapped strategy and design to warm hearts with spicy competition.

Marketing yourself is sometimes one of the most difficult tasks for an agency. In 2019 we made a concerted effort to try and better leverage our social platforms for promoting our work, the creativity of our staff, and our clients’ successes.

What had previously been an afterthought of “oh yeah, this could go on social!”, became more deliberate. We convened a committee of staff across disciplines to touch base bi-weekly to discuss a variety of topics related to social media; what was new on our platforms, how can we make better use of our platforms and how can we offer a diversity of content that resonates with our wide audience.

After establishing a strong cadence of diverse content that appeals to our wide audience, VIA Studio’s social media team was looking for a better way to flex our creative muscles and gain experience with an organic social media engagement campaign.

A breakfast food tournament could be fun...

The ideation process began around mid-February. We were looking for an opportunity in Spring to try and experiment with an organic social media engagement campaign. Looking ahead at the springtime calendar offered a number of events we could draft off of; including the Kentucky Derby, local events and naturally being a Kentucky-based agency we gravitated towards basketball!

A tournament based on fan voting was an intriguing idea. But what could we do a tournament of? Not everyone in our agency is a basketball or sports fan. One thing to know about VIA Studio that was mentioned in my pre-hire interviews and multiple times since I have joined the team, we are extremely motivated by food and drink. Whether it's stepping out to Louisville Cream on a nice afternoon, making our Friday walks to the Louisville Beer Store, or our Thursday morning staff breakfast meetings, we believe food makes everything more enjoyable.

We ultimately decided to create a breakfast food tournament. After multiple discussions about the scale of the initiative and what internal resources we could dedicate to it, we decided to go big! A 64 entry bracket was ultimately decided on populated entirely by breakfast food and drink. The bracket was broken down into four regions like the NCAA Tournament; Cereals, Savory, Sweet, and Wildcard – each made up of 16 entries. Starch Madness was born! 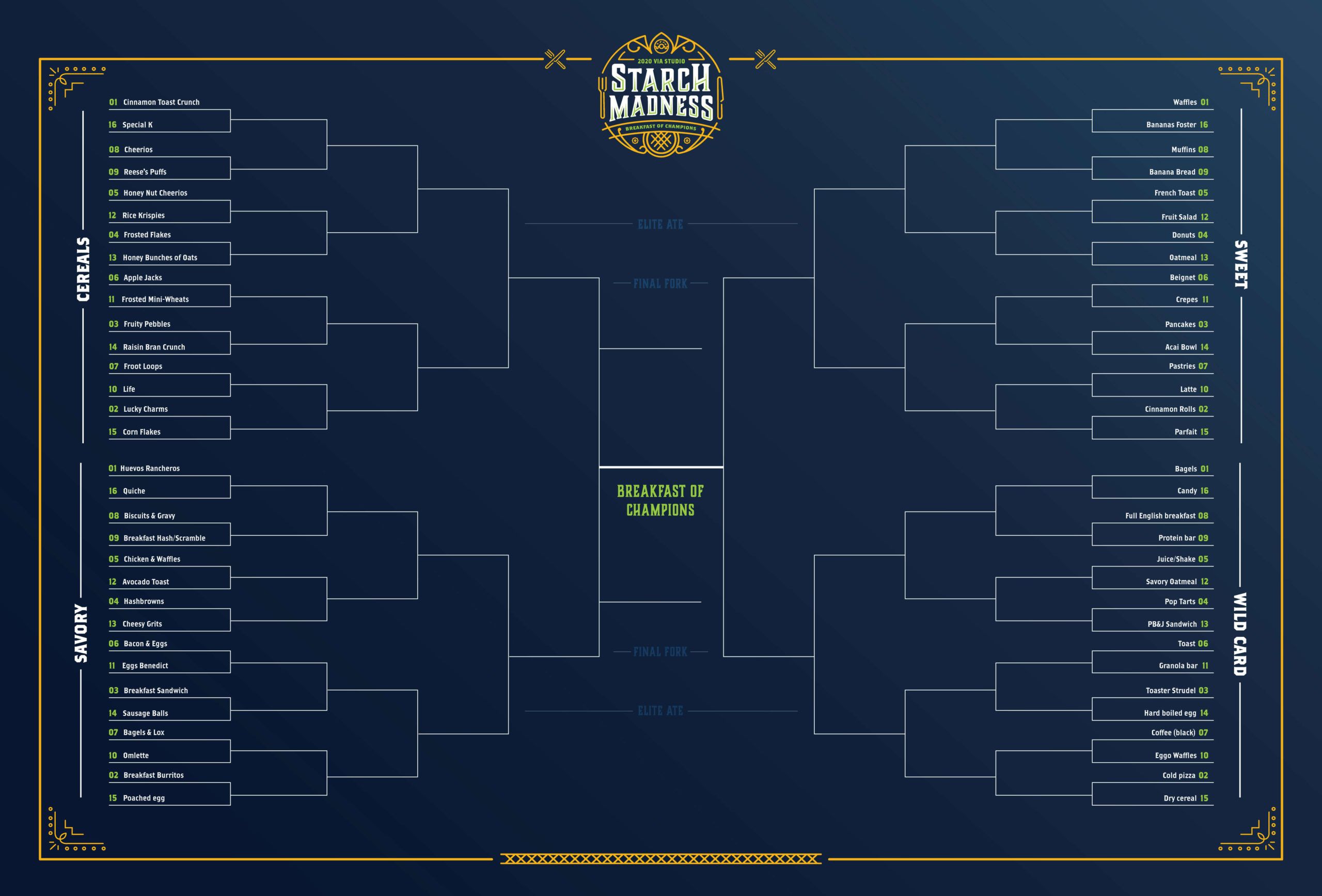 So, how do we efficiently manage a 63 matchup tournament?

While the idea was certainly exciting, the execution was another issue to address. A 64 team tournament ultimately involves 63 individual matchups. How do we execute this without it becoming a significant time investment for our creative teams and social media managers?

Ultimately the solutions were simple, leverage native tools within the desired platforms of Facebook and Instagram, particularly stories and polls within the stories. A template would be used for the background of the story poll posts, and the individual polls were the only items that needed to be updated.

From a creative standpoint, the template needed to be flexible enough to use for any given matchup, but engaging enough to keep our audience from swiping left. 63 matchups is a lot … So we decided to keep things pretty simple until we got to the Elite 8.

An additional efficiency was gained by linking our Instagram and Facebook stories so we only needed to publish each matchup once but have it be distributed to both platforms. As far as vote tabulation was concerned, the polls data was captured within each platform and could easily be combined within a spreadsheet. After being recorded in the spreadsheet, it was handed off to design which would update the creative and save out new bracket assets.

Ultimately the management of the tournament was a breeze and required no more than an hour or so for the larger early rounds. Later rounds were managed and updated within a matter of minutes!

Let's Have Some Fun

Creating a successful, organic social media engagement campaign was the #1 goal, but of course, wanted things to look good. This pet project allowed design to have a little fun, stretch beyond our normal realm of work, and create something engaging and memorable. This included a custom sports-themed logo, social story templates, a full 64-team tournament bracket, custom illustrations galore, and a final, champion animation as the cherry on top. 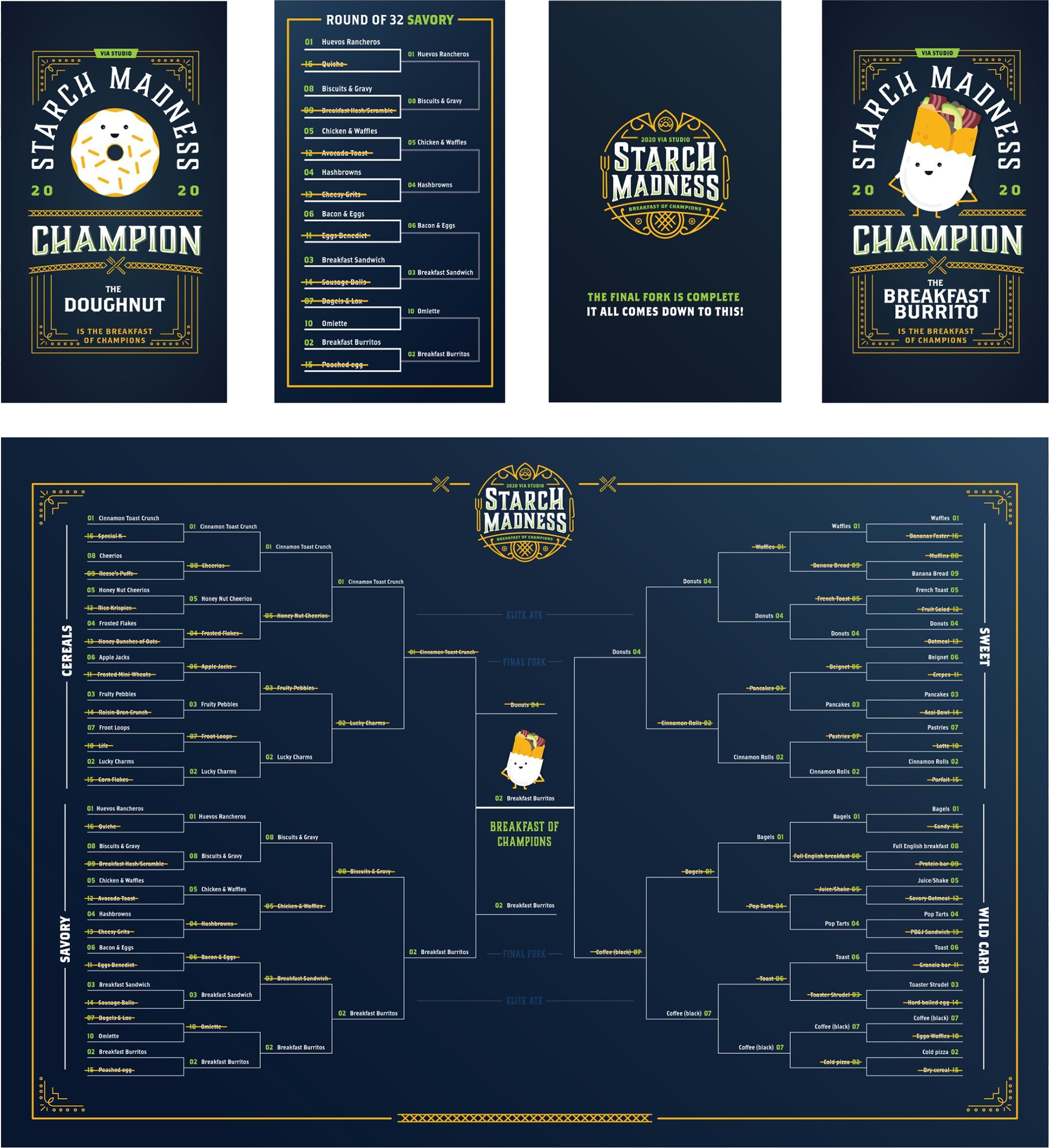 Starch Madness was first teased on March 13th, with the first round of matches taking place on March 17th. Unfortunately, this coincided with the effects of the Coronavirus pandemic and ultimately the cancellation of the 2020 NCAA Men’s and Women’s Tournaments. While we lost the event we were trying to emulate, we decided to go forward with Starch Madness nonetheless in the hopes of offering our audience at least a temporary distraction.

Over the duration of Starch Madness, first-round matchups began on March, 17th and our ultimate champion was crowned on April 6th, VIA Studio’s social channels experienced great growth in impressions, audience growth, and story engagements.

On Instagram, our followers increased 4% compared to the period before Starch Madness, resulting in a net follower gain of 34 users.

While Instagram was our primary platform for Starch Madness, our Facebook profile experienced encouraging growth as well over the course of the campaign. The VIA Studio Facebook page recorded a +23% increase in impressions compared to the previous period and a +60% increase in engagements.

Breakfast Burritos were crowned on April 6th, the intended day of the Men’s NCAA Tournament Championship, as the winner of Starch Madness 2020!