In The Plex: How Google Thinks, Works, & Shapes Our Lives | Book Review

So much complexity behind such a simple homepage

Behind the simple form field on the Google homepage lies a world of complexity that has grown quickly and profoundly changed the world, arguably for the better. Google, historically, has been tight-lipped about the internal workings of their organization. In this book, Google has given Wired editor Steven Levy unprecedented access to their organization. It pays off astoundingly well in the book he has written. Google is keenly aware of it’s place in the world and works to varying degrees of success to use it’s power to make the world a better place, making massive profits in the process. This book documents the history of the company from garage-based startup to corporate powerhouse.

Why Understanding Google is Important 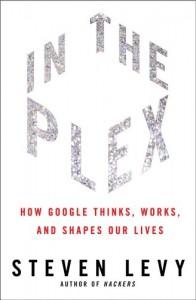 Google is the company that snuck into our lives and completely changed our way of finding information. Founders Larry Page and Sergey Brin, from a very early point in the company’s history, understood the power of their search algorithms. From that point on they have worked tirelessly to make sure their search and other products follow the now infamous value statement “Don’t Be Evil”. It’s admittedly a line that comes back to bite them when they make a misstep, but the cases where this value comes into play in some of the stories in the book are very insightful. The chapter on China, why they decided to step into that market and why they ultimately backed away show an ongoing commitment to that value, especially in instances when there is no right answer.

It’s important to understand the fundamental way that instant access to information has changed the world. There is ongoing debate about this access making people less able to solve problems on their own. I argue that it will allow us to solve more complex problems if we know how to access information and recognize patterns. Calculators in math class aren’t so bad, right?

Another continuing theme of the book is Page and Brin’s early education. They were raised in the Montessori tradition, which allowed them to think differently and challenge assumptions about how things work. A brilliant insight into two extremely intelligent chaps.

Google’s had it’s flops. Let’s be honest here. The biggest mistakes that Google has paid the price in PR for have been the ones that seriously challenge it’s “Don’t Be Evil” mantra. For example, Google Buzz was released to all their Gmail customers without permission, and when launched, was full of holes that allowed unwanted access to personal information. They quickly closed those holes, but it demonstrated an interesting quirk in Google’s reasoning. They have learned to tread lightly in the privacy arena, and I’m sure have hired an army of consultants and attorneys in the process.

However, Google’s desire to function at the speed of a startup will probably keep this problem alive into the near future. With Larry Page taking the helm as CEO this year, his desire to change the world will inevitably land him into some trouble. Check out the book on this subject. It’s highly entertaining.

SOCIAL MEDIA! It’s on everyone’s tongue these days, and Google, admittedly, has fallen short. They’ve gotten some of the niche social features right, like Google Reader, but haven’t come close to the experience and popularity that Twitter and Facebook currently enjoy. With the engineering resources at Google, it will be interesting to see how they try to compete next in this sphere.

Mobile seems to be a grand battle now between Google’s Android OS and Apple’s iOS ecosystems. This is also very interesting to watch play out, and will be for the foreseeable future. The advancements in mobile are just jaw-dropping.

So go read it then…

I’ve managed to lend or give this book to 5(ish) people now. Even the non-geeks have enjoyed it, which is why I think it’s a fun and enlightening nonfiction book. Anyone with an interest in business, search engine optimization, corporate culture, big thinkers, etc will get a kick out of this book. Send me a message if you enjoy it as much as I did!