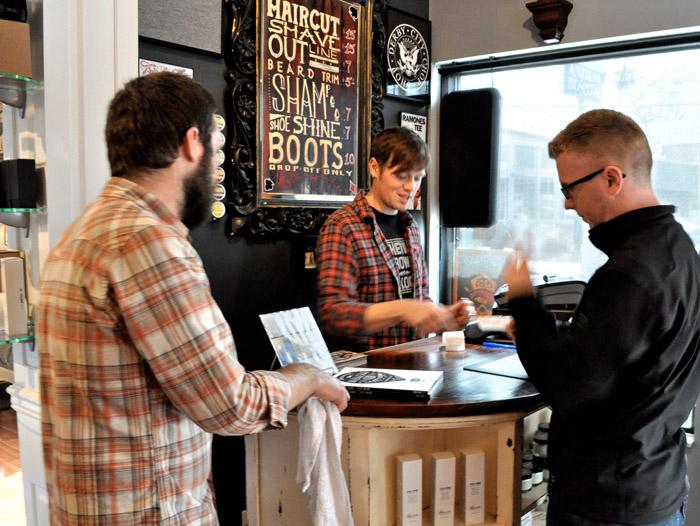 A typical hygiene regimen for guys consists of three things: hair cut, shower, laundry. Two of those are optional. Born out of necessity, the Derby City Chop Shop has not only been fulfilling that last lone requirement in Louisville, Kentucky, but exceeding expectations for all its patrons.

Founder and owner, Adam Hedgespeth’s dream became a reality when his wife formed the LLC for him as a birthday present nearly three years ago. “This town needed a barbershop for the fellas that could provide both classic and modern styles and services in an environment where one would actually want to go. A place where getting a haircut wasn’t just a chore,” said Hedgespeth.

Clients are welcomed with conversation as if they’ve just arrived at a collective hangout spot. Walls are decorated with everything from vinyl records to accolades to local art. Dice, Adam’s Boston Terrier and adorable Chop Shop tenant, is there to greet every visitor.

The guys at DCCS treat every newcomer as a seasoned attendee. Rushing a cut out the door is never an option. Clients are guaranteed to look suave walking out the Chop Shop doors– even if it is a sans-shower type of day.

DCCS just recently paired up with the well-known and still-growing Please and Thank You to collaborate. “Music is a big part of the environment at DCCS so it seemed pretty fitting to carry records,” said Hedgespeth.

He brought the idea to Jason Pierce of P&TY and, in no time, records were on the shelves, and in customers hands. Pierce believes that this whole idea of helping each other out is great to utilize whenever possible.
“Its endlessly important to find ways to collaborate with one another. Especially those businesses that are sort of sharing like-minded consumers, but is in a different neighborhood. We are all in this together right? We are all friends. So why wouldn’t we find ways to make the other better,” said Pierce.

However, there were once days when DCCS didn’t create as much bustle as it does now. The time spent waiting for customers certainly did not go to waste.

So, what did Adam and everyone else at Derby City Chop Shop do?

1. (a) Employing social media whenever possible. Used in the right ways and in the right areas, can be incredibly beneficial for companies that are just starting out. It’s all about connecting with the public and your target audience.

(b) Start now. No need to wait. Hedgespeth started keeping DCCS folowers engaged even before the shop opened by posting photos of the renovation and the progress to the opening. People love to feel like they are a part of something and DCCS recognized that.
“The word of mouth advertising has been invaluable and overwhelming. I think our customers really feel like they’re a part of the shop rather than just patrons,” Hedgespeth commented.

2. In it to win it. It’s not only Hedgespeth that is invested in the Chop Shop. The employees are vested in its success. The shop’s success is just as important to them.

3. Working together. DCCS works with local artists and other businesses to enhance the atmosphere of the Chop Shop while propelling others’ success.

4. Never settle. “Whatever it is you do, it should never be “good enough”. Being complacent is the first step towards failure. After that it’s just a matter of finding ways for people to discover you and keep them coming back. That’s about as simplified as you can make a business model, but it’s worked for us,” said Hedgespeth. Wisdom.

Check out the guys at Derby City Chop Shop at 1233 Bardstown Road. Pick up a vinyl record, get a fresh cut and shave all in the same trip. No appointment necessary.